The Shipley Glen Tramway; the World’s oldest working cable tramway (cliff lifts excepted) has been taking passengers up the steep wooded hillside that links Saltaire Village World Heritage site with the delights of Shipley Glen and Baildon Moor, since 1895.

In 2008 the Tramway was closed to the public in order to bring its hydraulic cable system and electric controls up to modern standards. 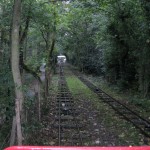 A major fundraising campaign was launched by the Tramway Volunteers. 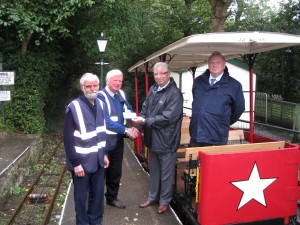 On Sunday 25th September 2011 members of the Lodge of Amity together with their wives, attended the Tramway to make a presentation of a cheque for £1000 from the Provincial Grand Master’s fund.

In thanking the Brethren for their generous donation, Cllr Dale Smith, Chairman of the Tramway trustees, said,

‘This money was desperately needed to help complete our major refurbishment project. Now that work can be completed, we intend to run the Tramway on every Sunday afternoon and are looking forward to the very popular Christmas Santa Specials.’

After the cheque presentation the Brethren and their wives were given a ride up and down on the Tramway together with a guided tour by Richard Freeman of the small but fascinating museum at the bottom station. 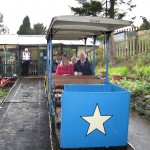 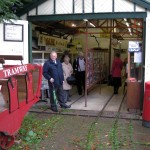 By a remarkable coincidence, Cllr Dale Smith’s father, Thomas Raymond Smith of Shipley Paint, was the Worshipful Master of the Lodge of Amity in 1956. Together with his brothers, Rodney and Martin, Dale remembers attending many social events at the old Wainman Street Masonic Hall, Shipley before the move to Hoyle Court in 1957. He said, ‘My Father valued and truly enjoyed his membership of the Lodge of Amity’

Afterwards The Brethren and their ladies retired to a nearby public house for Sunday lunch.