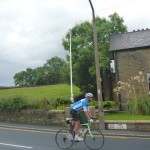 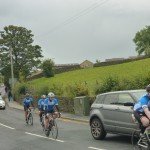 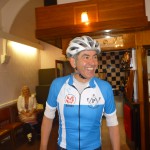 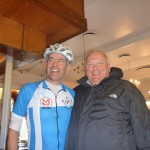 Forty five Freemasons took part in a cycle ride over the August bank holiday weekend to cycle 280 miles for charity around the ‘perimeter’ of the Yorkshire West Riding Masonic Province, calling at the masonic halls along the way.

Included in the team is Ilkley Freemason Phil Atkinson from the Lodge of Olicana 1522 who has been in training for this gruelling challenge for the last four months.

Phil began his masonic life as a member of the Lodge of Amity 4148 whose members generously sponsored him for this event.

The aptly named ‘Provincial Perimeter Pedal’ (PPP) started on Saturday 23rd August 2014 at Tapton Hall in Sheffield and headed north to High Bentham, across to Ripon and then South through Goole returning to Sheffield on bank holiday Monday.

It is a gruelling route with the cyclists climbing 7,000 feet on the first day, around 8,500 feet on the second, with a less arduous challenge on the last day. The route was inspired by the Yorkshire Grand Depart of the Tour De France, and is actually longer that route.

It took  in 24 masonic halls along the way, where the cyclists were greeted and served refreshments.

The sponsorship money raised by the cyclists, from other Freemasons, will go towards the Royal Masonic Benevolent Institution (RMBI) Festival which was launched in 2012 and runs for five years. It has raised more than £1m to date.